This is the final part of the series from the southern part of the world, straight from Australia… The end and beginning of an ERA. Jokes aside, check out the article! 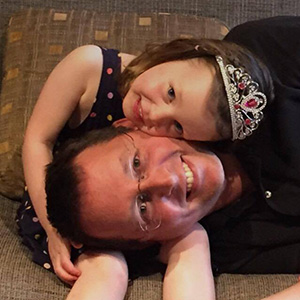 Our challenged expert this time is Scott Monin, lawyer, happy father, and escape room professional. He has a great deal of experience in the field and will give you good insights. We spiced things up with some questions that were asked in our earlier articles and we also included two questions from our contest winners.

Fruzsina Gyarmati: Scott, you’ve tested so many rooms in OZ. Could you tell us an interesting story that happened during beta testing?

Scott Monin: I have beta tested a number of rooms here in Australia. The most interesting story I can think of happened only a few days ago. I was fortunate to beta test a room (that was suitable for one to four players) all by myself. It was the first solo room I have ever tried. I did pretty well, but the interesting part was that after I finished the room, my teammates then also tried the room while I sat beside the gamemaster and watched them through the cameras. It gave me a real insight into the amount of work that good gamemasters put into ensuring that players have a great experience (from room set up to clue management, etc). I have sat beside gamemasters a few times now and each time I really enjoy the experience. I also really enjoyed watching how my teammates think.

Filios Saizides: Is Australia a good place to be in case you want to surf or escape the room?  Do people love playing in the rooms and is there a room dedicated to surfers? Or a room that is more about activities and sports?

Scott Monin: Australia is known for its beaches and surfing lifestyle, but it’s not quite as common as you might think. It’s not as though every Aussie hits the beach at the weekend to go surfing – I’d say we have about the same number of surfers here than anywhere else in the world. Escape rooms have become really popular here over the past two and a bit years. To my knowledge, there are no surfing themed rooms. And come to think of it, there aren’t really any sports or activities themed rooms either. Our rooms are more the typical escape before the murderer catches you or solve the murder, etc, although we are now starting to see some more novel room themes emerging.

Scott Monin: I’ve now been to 50 escape rooms here in Australia. The most popular puzzle in all of those rooms was probably either a simple cipher puzzle (i.e. symbol substitution with a key) or clues hidden in plain sight (e.g. pictures hanging on the wall) which are required to solve other puzzles in the room. My favourite puzzles though are those that repurpose everyday items as part of a puzzle. A simple example of the top of my head is in a jail cell room, where there is a three digit code for a lock written on a card which is covered by two large feathers (and the card and feathers are out of reach from your jail cell). At one point in the game, you find a simple Japanese hand fan, which you wave next to the feathers to make them move and reveal the code. In my view, whilst high tech puzzles can definitely be fun (if they suit the room theme), it is often the cheap low-tech but well-designed puzzles that I enjoy the most.

L. Mercado (Ask the Expert contest winner): How do you contain excitement and think seriously while escaping?

Scott Monin: This can be tricky, particularly for rooms that I have been looking forward to try out for a long time or which I have heard great things about from others. After having done so many rooms, my team and I kind of go into “a zone” as soon as the escape room timer begins. We know each other’s strengths and weaknesses and divide up puzzles accordingly. Sometimes I wish we would slow down and enjoy the puzzles and the whole experience a little more while in the rooms, but we are pretty competitive so we usually zoom through as fast as we can (and for non-linear rooms, I often have to walk back through the room after we escape to check out various puzzles I didn’t even get to see before one of my teammates solved them)

Filios Saizides: What if an escape room game was created where if people solve it they don’t pay anything but if they don’t a hatch opens and they fall in a river which of course would be safe from currents etc.? Do you consider this an interesting approach especially if it is like a series that people can watch online? Will Australians or people there be intrigued by this? What if it has also a bit of a physical challenge with a combination of puzzles and mystery?

Scott Monin: Your idea sounds like it’s straight out of a Japanese game show. The left side of my brain likes the creativity of your idea. However, as with most things in life, the right side of my brain usually rules. My day job is a lawyer, so when I read your idea, I immediately jumped straight to all of the risks associated (like health and safety concerns, the risk to the escape room owner that everybody escapes and they therefore receive no money from players (or that owners might counteract this by having impossibly difficult rooms, etc). I’ve often thought it would be awesome to have an escape room where the various rooms are stacked vertically (so that you might need to open up a trap door and descend a ladder or pull down a ladder to climb up), but then I think of the litigation involved from people falling, or the fact that it would not be wheelchair or children friendly, etc. Our health and safety laws here in Australia (as well as Council rules for fitting out escape rooms) are pretty onerous, so whilst these ideas are cool, they will never happen here.

Matt Domville (Ask the Expert contest winner): What can an escape room company do to distinguish themselves from the competition?

Scott Monin: I think there are many ways for escape room owners to distinguish themselves from the competition. Taking some examples from here in Sydney, some rooms try to differentiate themselves by clearly going after a particular market segment (e.g. corporates or schools, horror themes, etc), others promote that they have the most high tech rooms in Sydney. I think the first way to differentiate your business is to do the simple things well (because otherwise, you will differentiate yourself in a very negative way) – so get the website working properly, have a dedicated gamemaster per room, have logical, varied puzzles that have been adequately play tested, etc. Then I would think about which part of the market to target and go after it. If it were my business, I’d design rooms around the things I love, like older adventure games (Day of the Tentacle, Myst, etc) or my fave movies (Goonies). I figure if I love these things, then others would too…

Filios Saizides: What if you were forced to leave Australia tomorrow and relocate to Cyprus! What would you take with you if you had only one category of stuff to take with you in a box? What stuff would you put in? A) Clothes  Kitchenware C) Escape Room props D) cameras E) A pet F) Or ?

Scott Monin: Interesting question. If I had to leave Australia tomorrow and relocate to Cyprus, from the list you have provided I think I’d probably pick my camera. I have a decent SLR camera that I would not want to leave behind. Also, I don’t have a pet to bring and the rest of the items I think I could buy over there pretty easily. Oh and I would also pack my wife and daughters into the plane with me.

Fruzsina Gyarmati: I have a question about Melbourne Olympics in 1956. Which of the following teams fought their way to the water polo final victory?

Fruzsina Gyarmati: Unfortunately that would be too obvious. The twist is, that it is D) my country Hungary.

Danielle Height: Who is Canada’s PM? A) Kathleen Wynn B) the son of Pierre Trudeau C) The Queen of England E) Martin Short

Scott Monin: I’m confident of this one – Justin Trudeau (who I assume is the son of Pierre Trudeau?)

Filios Saizides: In the rare case that a team of people manage to exit within five minutes because they are enlightened or have been told by others the solutions of this room (which never happens, so it’s theoretical question), what would you do?

Scott Monin: I’m an escape room enthusiast, rather than a room owner. But, if it were my room and a team escaped in five minutes, I’d probably go back to the camera and check whether or not they cheated! If they were truly awesome enough to escape fairly in that amount of time, I’d get their feedback on how to make the room more challenging for them, or I’d check whether any of the puzzles were able to be brute forced so that I could correct this. And I definitely wouldn’t charge them as I don’t think they would have got their money’s worth!