Here comes the 4th part of the puzzle… I mean the article series. Cyprus is in the house or Cypress on the Hill? Come and check it out! 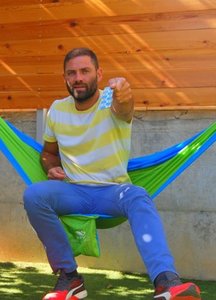 Our 4th expert is Filios Sazeides. He is quite a creative character, preparing team activities and special projects all the time. He is now challenged by the other experts and our round 2 contest winner. Challenge yourself and enjoy the questions.

Danielle Height: Do escape rooms in Cyprus use multi-lingual puzzles?

Filios Sazeides: Of course we give the option for people to choose between Greek, English or Russian for the clues in the room plus the game master’s support.

Scott Monin: Tell us about the best puzzle that you have seen in any escape room in your country (you know, the one that brings a smile to your face when you think about it).

Filios Sazeides: I am resisting not talking about a puzzle from one of our rooms which is not basically a puzzle but actually an approach to how people think. In a secret room that gets revealed after playing the Crazy Granny scenario, the room is dark. Even though there is a switch for the lights players, since they have a torch from the previous room, use the torch for like 5-15 minutes and they don’t even search for the switch which is right in front of them. As soon as they just press the switch they all laugh at this, as it was right in front of them. Sometimes we tend to look for an obvious solution because of the route we followed up to a point which sets our minds in that perspective, which I find interesting.

A room we played in another city had a puzzle where you have to use a recorded message to duplicate whilst playing on a piano… it was nice to actually play on a piano and that you get a clue from the correct piano keys.

Fruzsina Gyarmaty: Could you explain to us how does the ancient Greek history and culture influence the Hellenic escape rooms?

Filios Sazeides: Well frankly we didn’t go that route though it would surely be interesting indeed to incorporate myths, maths and philosophy but there might be an issue with that.  The issue is that with our approach on our rooms we did not want to have information that people had to already know or stuff that people have to read. In this way we approach the rooms that they are best suited for everyone without necessarily focusing on a particular subject. It would be an exciting project to create a room that would educate people on different subjects whilst not sacrificing the fun aspect to it… so it might be more like a fun, juicy, and astonishing approach to facts that exist in Cyprus or from Greek history.

Scott Monin: Australia celebrates large structures all over our country as tourist attractions, such as the Big Banana (a large banana constructed in Coffs Harbour about 5 hours’ drive north of Sydney) or the Big Merino (a large sheep constructed in Goulburn). Which of the following are real Big Structures in Australia? :

A) The Big Wheelbarrow

B) The Big Poo

E) All of the Above

F) None of the Above

Filios Sazeides: To be honest I don’t have a clue… but without using google search I will just pick which one sounds big and interesting! The Rocking Horse sounds big with groups of people entering and rocking the place. This would be an innovative approach to an escape room where the people need to be balanced correctly by not moving on one side such that the whole structure gets set on an angle. So the goal is to keep the structure in balance whilst you are solving puzzles by using clues that are revealed only when the structure is in balance. I know my answer gets a twist but as an escape room / entertainment developer that is the way I sometimes see things; how can we convert a place we enter, into an entertainment center!

Filios Sazeides: I will take a guess no need to choose google, that wouldn’t be challenging at all. My answer is: hockey as I guess the cold weather of Canada had to be used somehow for a sport.

Hayley Fuller (round 2 contest winner): Are there any escape rooms that are hosted underground in a cave?

Filios Sazeides: Hm… That would be nice especially in the Stone Age period if you had a T-REX chasing after your team and you had to find all the clues. Or like Odysseus used sheep to escape from the cave of Cyclops. Frankly except that it would be a wonderful experience, but actually I have not seen one anywhere! When there is one created please let me know.

Fruzsina Gyarmaty: I usually ask Hungarian related questions, but I will make an exemption. Which is the Greek letter that you can both eat and count?

D) Pi (well I don’t know a product, service that can be eaten or counted)

E) Omega is found in fish and in some seeds

Fruzsina Gyarmaty: Well, that’s a great and very smart answer I would say it’s correct, but the actual solution is D) the Pi. And you know why? Because Pi in maths means 3.14 and in English it is pronounced as “pie” that you can actually eat. So you ruled out my solution, but it’s even funnier like this. Congrats.

Scott Monin: The answer is: E) All of the above. We do love big strange structures.