Well after several months I finally got the opportunity to escape with a member of ERA! I was also very familiar with Freeing Canada Station and was really looking forward to the escape! I set out with Alicia to meet up with Matt and his crew to give it our best shot!

Freeing Canada Station has a great website with pretty clear directions to their locations, but even still it can be a little tricky to find. The main entrance is somewhat hidden around the corner of the building so keep that in mind when you head over, and keep an eye out for their logo on the door. That being said there is ample amount of parking, which is always nice!

As we mentioned in our previous review, Freeing Canada Station is right beside T&T, so we went early to grab some food too! The lobby is the kind of place I could hang out all day, and the owners Ken and Ada are two of the nicest owners I have ever met! They have complimentary popcorn, huge lockers for belongings, they have lots of space to hang out, and there are various drinks and other food available for purchase! I was really happy with the lobby, one of the nicest I have been in!

When I first walked in the room I was a little underwhelmed by what I saw, but as we progressed through the room I was happy with how the room was set up. The room itself is pretty basic, but is very high quality. The props were quality stuff, sturdy and able to withstand some abuse, and the locks were not just random safes and locks, they all cleverly fit the theme. The room is simple, but fairly effective at making the customer feel immersed in the puzzle. The room was also very well lit, which I am a HUGE fan of (I hate having to strain my eyes to see things!)

I can’t say that I have ever been in a dance studio (just never been the dancing type I guess!), but when I walked into the room this it matched what I think one would look like. All of the props and decorations fit the theme really well. The story behind this room states:

The daughter of a wealthy man was competing to be the lead dancer in Black Swan, she practiced at the dance studio day and night without going back home. The wealthy man decided to check-in on his daughter at the dance studio but only to find her dead body when he opened the door. A message was found written on the mirror, “Revenge for me”. The wealthy man chose not to alert the police or media as he wanted to revenge for his daughter. Instead, he hired a few private officers to uncover the story behind his daughter’s death and who killed her.

Although grammatically a little confusing, the plot is upheld throughout the room and the story of the room is one of the best parts of the experience!

After debriefing after the room everyone was pretty impressed with the variety of puzzles in the room, and the fact that we could split up and work on multiple puzzles at once! The only downside is sometimes we were unsure which solutions corresponded to different locks, but that didn’t end up wasting too much time so it wasn’t a big problem.

I really liked this room, there is not a lot of tech, so if that is something you absolutely require in a room, you may not enjoy Black Swan too much. There were some slight questionable facts within the story but these were pretty minor. Overall, the storyline, along with the great variety of puzzles, and the very friendly staff made for a great experience! We were not the quickest at solving it, but we were more about building team chemistry and just having a good time, which the room was great for! We all had a blast, despite how serious we look in the photo! 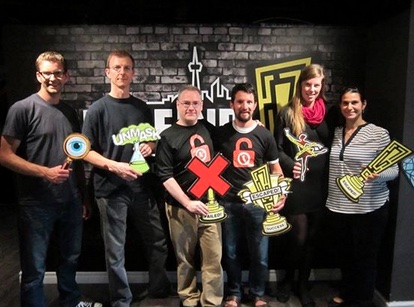